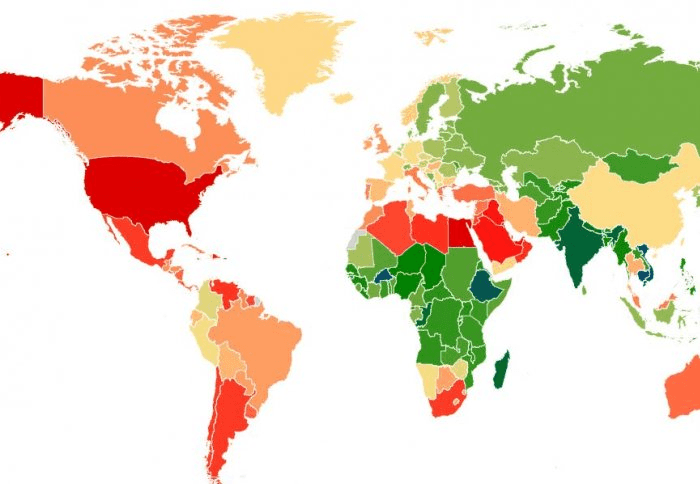 More than 603 million adults and 107 million children on this planet are obese, according to a report published in 2017 from the Institute of Health Metrics and Evaluation, based at the University of Washington in Seattle. The global population is approximately 7.5 billion, so the obese population represents around 5% of all children and 12% of all adults, globally.

Although the obesity levels in the United States always make headlines, it may come as a surprise to know that it’s not the US that tops the obesity chart but rather America Samoa and other South Pacific islands, where up to 75% of the populations are measured as obese. The weight of adults is increasing at four times the global average in this part of the world which could, in part, be due to the influence of colonial eating habits.

Rankings shift, but the top 20 world obesity list (compiled by the Institute of Health Metrics and Evaluation) looked like this in October 2017:

Of the world’s most populous countries, we see that it is Egypt, United States, Saudi Arabia and Bahrain that make this top 20 list. The UK is 43rd overall but is also ranked the most obese OECD (Organisation for Economic Co-operation and Development) country in western Europe with well over 25% of the population having a BMI of 30 or above.

At the other end of the scale Asian and African countries dominate. Japan and China are relatively low on the list (157th and 152nd respectively) and fewer than 2% of Ethiopia, Bangladesh, Nepal, Madagascar, Vietnam and India are obese. Most European countries are littered throughout the middle of this list, with the least obese European countries being Switzerland (111th), followed by France (108th), Denmark (107th) and Sweden (104th).

According to the World Health Organisation, the current obesity picture in Europe looks something like this:

When we look at England in isolation the picture is interesting. Camden has the lowest level of excess weight in the country along with Kensington and Cambridge. London, overall, is the ‘least fat’ region in the UK. This trend spills out into the home counties and Kent with urban areas all over the South East showing relatively low levels. The north east of England has the highest obesity levels with over 75% of the population in Rotherham carrying excess weight. The surrounding areas of Yorkshire and the Humber and the East Midlands are also ‘fatter’ than average. Boston has the highest level of obesity in the country.

Next time I will be discussing what drives high levels of obesity in England and the UK, compared with other European countries. Until then, follow this link and scroll down to see what the obesity levels are like in your postcode:

Mediterranean style food and culture form the heartbeat of her consultancy and her deep love for the diet and way of life in this part of the world is inspiring.  She offers a broad range of services to children, adults & businesses and has a fun, emotionally intelligent & realistic approach to her work.  She is passionate about the health of the planet and helps her clients make choices that reduce environmental impact.

Keep up to date